Territory of the Dominion of Melchizedek 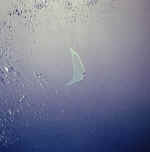 Taongi is located at 14.38 north latitude and 168.58 east longitude lying within the Northeast Trades, thus there are steady winds from the northeast bringing mostly fair weather from November through June. The rainy season is from July to November and has a great deal of fair weather but the trades weaken and come from the east. Total yearly rainfall is estimated at about 45 inches. Typhoons (known elsewhere as hurricanes or cyclones) seldom originate in or pass over this area and gales are infrequent coming from the southeast when they occur. There is little variation in temperature throughout the year with a minimum of 71 degrees Fahrenheit and maximum of 98 degrees Fahrenheit, a high mean temperature of 83 degrees Fahrenheit and a low mean of 81 degrees Fahrenheit.

The southeast “ratak” or sunrise side of Taongi Atoll has the vegetation covered islands that remain as high as 20 feet above sea level which is two times the elevation of the capital of the Marshall Islands, Majuro Atoll, some 425 miles south of Taongi. The small islands of Taongi, the longest, at least 5 miles in length, are part of the coral reef that surrounds the central lagoon of 30 square miles.

These reefs are in the form of a fat comma opening to the west on which side exists the only break in the reef where a boat may pass safely into the lagoon. Made up of the skeletal remains of countless small marine plants and animals that found a home on this formerly volcanic island or sea mountain, the reef has gradually built up as sea level changed, or the islands subsided, and now provide land area of 1.25 square miles for tall trees and breeding grounds for migratory birds and turtles.

While few forms of wildlife occupy the land, marine life in the lagoon and the surrounding ocean are abundant. The lagoon to be beautiful with sandy beaches and, with the tide going out, waterfalls miles long were formed by the water flowing over the reef. The beach pictured to the right is typical of those on the lagoon side of the Taongi Islands.